Osprey news first- thank you to everyone who has got in touch to commiserate with us about the lack of osprey chicks hatching at Loch of the Lowes this year. We are glad to know so many of you share our sense of the disappointment being balanced by the awareness for the privilege of watching our veteran female for another year. As the parent of 50 fledged chicks in her breeding career, we can’t fault her, and we are all well aware that she has probably already done more than any other single bird to her species recovery in the UK.

The Big Question: Why? There are two possible explanations for the lack of hatching this year: Infertility and Damage. We know that since 2011 this nest has had a lower than normal fertility rate, which could be caused by our females advanced age (most likely) or by a problem with the males fertility or their incapability genetically as a pair. The unhatched eggs the last three years were found to be almost all unfertilised , meaning they were ‘blanks’ with no embryo inside, and could never hatch. If however, these eggs were fertilized, the embryos inside could have been damaged by exposure to cold during incubation (this happened several times for up to 90mins) or by physical damage during the crow attack that allowed bacteria etc inside the egg. We will not know which of these explanations is the correct one until we can study the eggs- and for that we will have to wait until the birds give up incubation.

Satellite tracking: Just to clarify any confusion, yesterday’s blog with the fascinating field report from Guinea Bissau related to Blue YZ , the 2013 bird hatched at Loch of the Lowes.  We know it’s confusing with such similar names, but Blue YD the 2012 SWT Angus chick is the bird whose progress we are still tracking, after he made his first ever return to the UK this month. Unfortunately we have received no new data from the satellite tag since the 21st May. However, we have reason to believe there has been a technical malfunction of the tag (which we are getting help with from the tag manufacturer in the USA) rather than anything wrong with the bird. So keep a sharp lookout anywhere in the northern half to the UK for a satellite tagged osprey with an aerial and a blue leg ring- and be sure to tell us if you see him about!

Lastly, we wanted to remind you there are still lots to look forward to here at Loch of the Lowes reserve this summer: right now we have new red squirrels kits around the feeding station; our lilypad Grebes are nest building again; there are young ducks and geese about; there are oodles of woodland birds to be seen on the feeding station and blue tits on nest box camera; there have been good otter and beaver sightings this week; there are fabulous flowers and beautiful butterflies about too!  Not to mention our great array of wildlife themed events, family fun days and guided walks coming up- so do join us ! 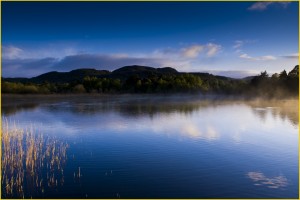 Osprey news first- thank you to everyone who has got in touch to commiserate with us about the lack of osprey chicks hatching at Loch of the Lowes this year. …