Within Osprey pairs nest-building is a cooperative venture. The birds search their local surroundings for dead branches and other suitable material and can go to a lot of trouble to bring back a piece that they consider a valuable addition to the comfort or strength of the nest. Our male makes very good use of the nearby golf-course for collecting large divets of earth and has been seen breaking off large dead branches in flight – some measuring several feet long.  He has brought in 104 items to date, and maintains a steady stream of sticks and moss on almost a daily basis.

Generally it’s the males that bring in the largest sticks while the females usually fetch more in the way of grass, moss and bark.  So far this season our male has carried out the vast majority of the work with the female bring in just 2 items (and a pheasant wing). However she spends a lot of time weaving in the material brought by the male into the structure of the nest and it can take a long time for the birds to arrange the branches into position. We can reasonably expect her to become more active later in nest maintenance , when the male concentrates on hunting to provide for his family.  By the end of the season the nest will appear flat and earthy on top as soft material is added while the young are growing, in order to create a flat platform (like a run-way) for when her chicks are older. 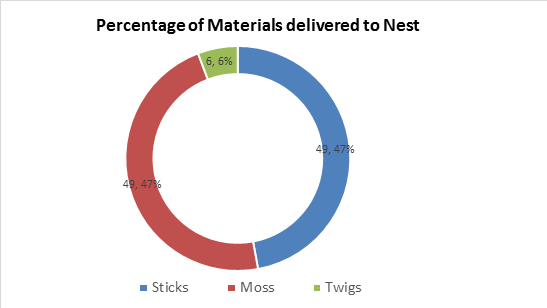 Often pairs, even though they already have a large nest, still feel the impulse to keep on building and making it bigger. Nests on cliffs, on man-made structures or on the ground can reach 1.5 to 2 metres in width and more than a metre in depth.  Their weight can be staggering, anything up to 200 kilograms.

Nest trees are becoming associated with many types of habitat as the Ospreys population grows in Scotland – from traditional Scots Pine forests to lowland farms, in open woodlands or plantations, near rivers, lochs and estuaries, and on open coasts. Scottish ospreys continue to prefer conifers because they provide strong broad tops and a secure base for building. But there is variation and nests have been found on live Scots pine, dead Scots pine, Douglas Fir, silver birch , alder and red-wood, oak and wild cherry.

Within Osprey pairs nest-building is a cooperative venture. The birds search their local surroundings for dead branches and other suitable material and can go to a lot of trouble to …