We are in the midst of a very quiet time at the osprey eyrie here at Lowes. In these days when all we can do is anxiously wait and maybe guess how many chicks we will get at the end of the incubation period (37 to 42 days after the first egg was laid), we have put some time aside for some number crunching and see how incubation duties are shared between the pair so far.

In general, female ospreys do the bulk of the incubation. Males will take over every time they bring fish so the female can go to her favourite perch, eat, stretch her wings and just take a well-deserved break really. Females do all night incubation with the male perched nearby the nest, whilst males do anything between 20-35% of daylight incubation. But we have a very keen male this year, so keen that on some occasions he refuses to leave – with the female patiently waiting on the edge of the nest – or gently forced her from the nest cup to sit on the eggs himself! 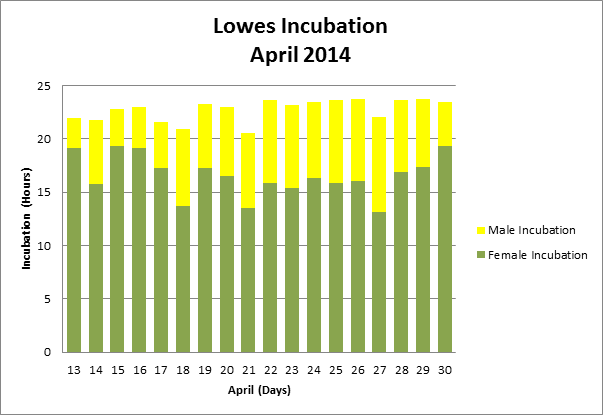 The graph above shows the number of hours each osprey has spent incubating, with the female (green) doing most of it as expected, and the male (yellow) almost trying to make up for lost time in the last two weeks of April. On average he has done 27% of the incubation – 73% for the female – but some days he has done 30-35% and even as much as 40%! Males tend to do less during the first few days of incubation possibly because the eggs are still being laid by the female. Even though the number of times the male has taken over incubation hasn´t really changed that much over time, the time spent incubating was a lot shorter during the first few days – from a few minutes up to an hour – but he is spending more time in the nest now – he frequently spends more than 2 hours incubating with 5 solid hours on one occasion!.

Also as you can see in the graph, male and female incubation doesn´t always account for 24 hours and this is due to short changeovers and the time eggs are exposed. In April the eggs were exposed 14 hours in total which translates into an average of 55 minutes spread throughout the day with incubation swaps and wing stretching/comfort break events. We should also remember that we have been quite lucky, especially when the female was disturbed after laying her first egg by people walking nearby the nest tree and scared the female away for 20 minutes, because neither bird has left the clutch unattended for long periods of time, which happened twice last year and it was quite worrying due to adverse weather conditions.

We have already started with May so stay tuned for more updates!

We are in the midst of a very quiet time at the osprey eyrie here at Lowes. In these days when all we can do is anxiously wait and maybe …