Since we last heard from him, he left Spain on the 7th at 7am and flew 220miles across the Bay of Biscay to France. He made first landfall on the island of Ile de Re by 3pm and then roosted 20miles inland in the rich agricultural fields.

On the 8th he flew north through France but only travelled about 100miles or so, before roosting again. On the 9th he reached the north coast by 3pm  and was near  the town of Dieppe. At 5pm on Friday he was about 4miles inland on a  small river, only 90 miles from Paris.

We hope he has the sense to stay put for a day or two before crossing the channel as there is some bad weather in southern UK forecast for tomorrow.  We will have a big metaphorical ‘welcome mat’ out for him though when he does make it to UK soil- he will be only the second UK satellite tagged young osprey chick to have made the return journey successfully.

Q: Since the crow attack the female has resettled on the remaining two eggs.  Is she aware that there is one missing and that it was the crow that took it?

A: We believe that the birds can “count” so to speak and are aware that one egg is missing. The female certainly saw the crow leaving with one egg and both birds have been extra wary of crows since the attack.

Q:  Is it likely that the crow, knowing that there are eggs left in the nest, will return again to try and get the remaining two?

A: Yes, corvids are renowned for being incredibly intelligent and may indeed be keeping  a beady eye on the nest- if the parents leave the remaining eggs unprotected at all, the crows will be quick off the mark, so our ospreys will have to be extra vigilant.

Q: Just wondering, with the recent egg predation, did you manage to see any of the internal contents whilst the crow was eating- any indication of blood or embryonic development?

A: It was difficult to see this kind of detail during the crow attack, and even freeze farming the footage. At this stage of egg development there would still be considerable liquid ‘white’ in the egg surrounding a relatively small embryo, so it is difficult to tell is the egg that was destroyed was fertilised or not.

Q: Is lady “listening” to the eggs, as sometimes she seems to be tilting her head as if she is?

A: Yes as the eggs develop, the female often listens to the eggs, but it may be a bit really yet to for any sound to be coming from inside them. The bird may also turn her head to listen to sounds below her- tiny birds nesting in the lower parts of her eyrie, or even a deer under the tree as happened earlier this week.

Lastly we have an interesting reserve visitor this week- a feral male Mandarin Duck!This great photo is by Jim Murdoch- thanks for allowing us to use this great picture. 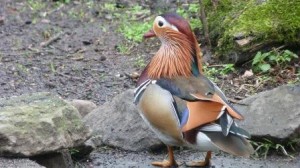 More exciting news about Blue YD our young osprey on his first spring migration- he’s in France! Since we last heard from him, he left Spain on the 7th at …