Our ospreys have been basking in glorious sunshine and incubating happily all Easter weekend. There have been no dramatic incidents, which is a blessing- our hearts go out to our friends at Rutland Water osprey project where the nest politics between rival males are rampant on the Manton bay nest, and the future of the eggs there looks uncertain. What this highlights is that so many of our presumptions about ‘normal’ osprey behaviour are being rewritten each year as we get the opportunity to study these birds in such detail. 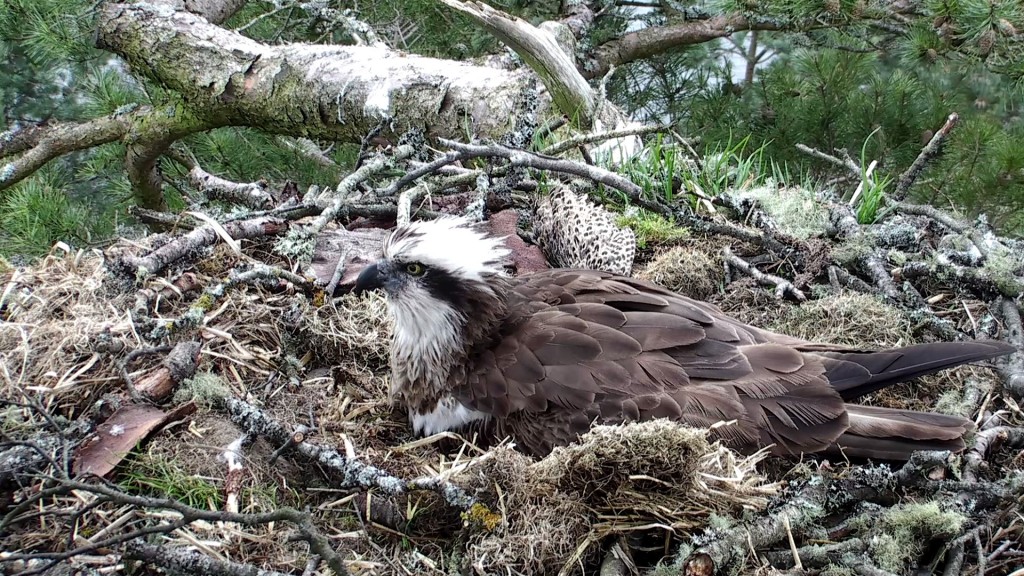 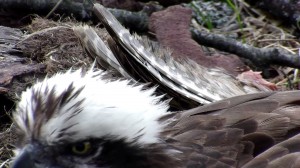 An interesting new observation from our well-studied nest is that for the first time I can remember, the female osprey has brought in a dead pheasants wing to the nest. She seems to have brought this in as nest decoration rather than food (the wing ends are almost all feathers and no meat and are often discarded by predators) . It has been half-heartedly pecked at by both birds, but not eaten- perhaps she was attracted to it as soft extra padding? For more examples of strange things brought to osprey nests as decorations- see the blogs from earlier this month.

Q: How did the female cope with nearly 24hrs without a fish delivery over the weekend?

A: We believe she may well have fished for herself during one of her spells off the nest, which lasted over an hour, whilst the male incubated. She is of course perfectly capable of doing so, but usually relies on the male it’s his role to support her and the chicks. She really only needs one large or two small fish a day at the moment to eat herself – this will increase massively however, when a chick is hatched.

Q: Why are the birds panting with their beaks open?

A: They are hot! Believe it or not the glorious warm weather we’ve been having means they birds are warm on top of their tree, which doesn’t have much shade. They cannot sweat so release excess heat this way, much like a dog.

Any other burning questions about ospreys? check our FAQ’s above then if you can’t find the answer, send it to ospreys@swt.org.uk  and I will endeavour to answer it here for all to share.

Our ospreys have been basking in glorious sunshine and incubating happily all Easter weekend. There have been no dramatic incidents, which is a blessing- our hearts go out to our …