As we now have three ospreys eggs in the nest, matings between the birds have ceased ( last recorded on the 17th of April). Our wonderful night watch team of Ainoa and Kirstin have been doing some number crunching for you based on the detailed behavioural records we meticulously keep here- enjoy!

This is the third year partnership of our current osprey couple and the fourth “husband” our resident female has enjoyed so far. Since both arrived  this year we have been thinking about how their relationship has evolved over the past three years in terms of bonding and mating frequency, as well as how their behaviour might relate to fellow British ospreys or their American cousins that have been studied in great detail.

Our female has quite regular timings and arrived to Lowes March 30th in both 2012 and 2013 and only a day later this year, March 31st. Our male arrived on March 21st this year, on March 24th in 2013 and March 30th in 2012. They have always seemed eager to begin their mating process soon after reencounter each other and he usually performs sky dancing for her at first, as well as bringing fish to the nest as all ospreys do.

Studies show that the average number of mating attempts are 160 for experienced ospreys but a lot more- 240 or more- for inexperienced individuals or new couples. In their first year 2012 our ospreys mated a total of 195 times, which was probably our male´s first breeding season and much practice was needed for him, whereas last year they only mated 151 times ,but they balanced it out this year with a total of 203.

In some ospreys, such as American birds, it is believed that the high number of mating attempts has to do with ensuring paternity: The fact that the male provides the female with all her food prior to laying the eggs means that whilst away fishing for her , another male osprey could potentially sneak in and mate with her ,  so by more frequent mating’s himself, the male ensures his genes are passed on.

Interestingly enough, it seems the number of successful mating attempts is the same for old and new couples; the only thing is that new couples need more practice!

There is still much to discover about ospreys and their breeding biology is a very hot topic. In other raptor species such as goshawks or kestrels the number of days a female is fertile is well known but there is still a lot of discussions about ospreys. In our ospreys mating attempts seem to significantly drop (see graphs below) after the first egg is laid and quite frequently no mating attempts will take place by the time the third (or fourth!) egg is laid. This is something that has been observed in other ospreys around the world and it could have something to do with the female´s fertile period but these are only speculations although it is suspected that females are most fertile in the few days before the start of egg laying. 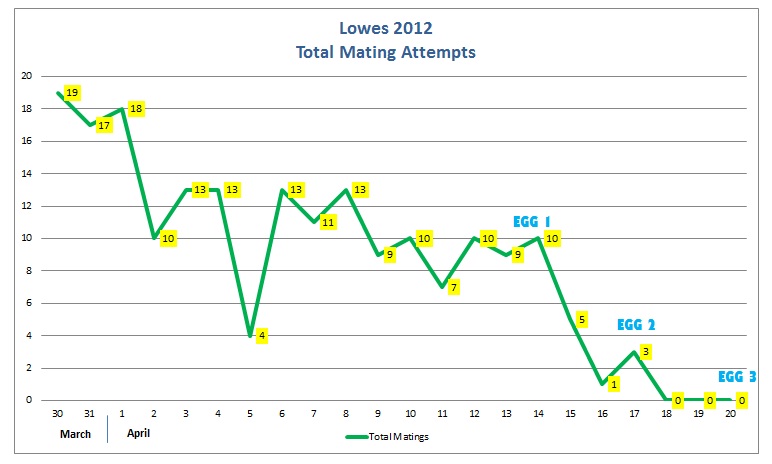 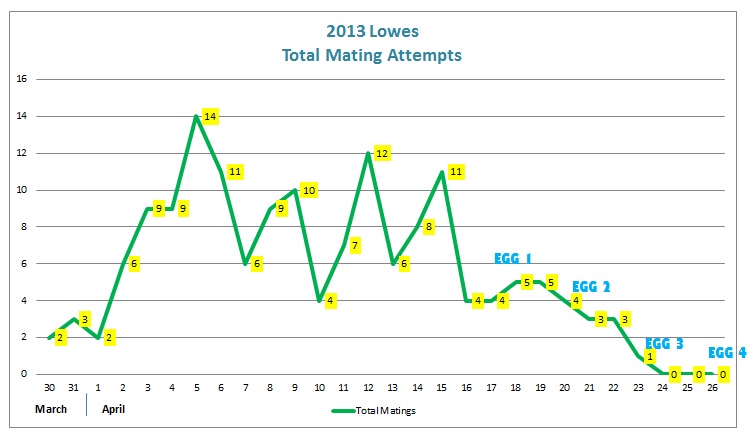 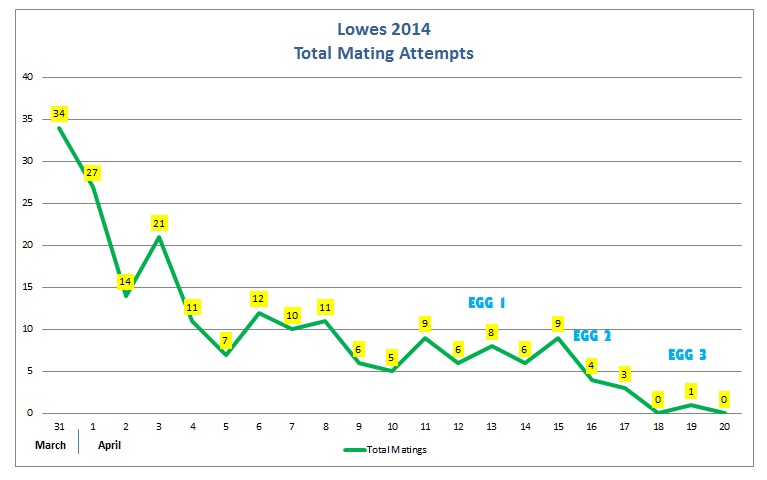 Generally, eggs are laid 10 days or so after the first mating attempts – in Loch Garten ospreys have averaged 12 days over a 14 year study period – but our female enjoys taking her time and in the past three years she has laid the first egg between 13 and 19 days after the first mating attempt. Before she lays an egg, the female osprey spends almost all her time on the nest and relies on the male to bring her fish, which is known as courtship feeding. Their mating periods have been quite regular, between 21 and 28 days and she has laid three eggs in 2012, four eggs in 2013 and three eggs this year as well. Hopefully we will get at least one chick this year as well and we will be able to follow their first migration successfully!!

Keep an eye on the blog for future updates on other aspects of osprey behaviour as we built a more in depth picture of what is occurring with these wonderful birds!

As we now have three ospreys eggs in the nest, matings between the birds have ceased ( last recorded on the 17th of April). Our wonderful night watch team of …