So far its been a very soggy winter here in highland Perthshire and though we’ve had a dusting of snow, there has mostly been rain, rain and more rain! This means the lochs and rivers are full to the brim, the local wetlands have had a good flush out and refill, and the soil in our woodlands is pretty waterlogged. Most of our plant species will cope fine with this, with trees like willow, alder and hazel being well adapted to survive seasonal inundation.

The flooded fields are proving a bonanza to various birds like gulls and ducks who are hoovering up the drowned worms and other invertebrates- it can be bizarre watching swans paddling around in usually dry fields! Mammals such as deer and badgers that usually struggle when the soil in frozen or the snow very deep, are doing well this winter too as they can feed easily.

The wildlife that is not doing so well in this weather are our smallest and the burrowers- things like voles and mice risk drowning in their holes  or being displaced. Moles are struggling to keep their tunnels open  and some hedgehogs may find themselves drowned in hibernation.

All of this may of course change as winter isn’t over yet! Osprey watchers may remember that we had snow here and a frozen loch right into April last year. Having said that there are a few clues that some of our wildlife is feeling spring such as: Great spotted woodpeckers drumming in the woods ( a sign of territorial courtship) ; goldeneye and mallard ducks starting their courtship head bobbing displays; and the red squirrels at Loch of the Lowes are also feeling frisky- this weekend we had five at once on the feeding station, playing and chasing each other up the trees- typical pre mating behaviour.

We hope you had fun last weekend doing your Big Garden Bird watch- we had help here at the reserve from the kids from  our local Wildlife Watch and WEX group– thanks folks!  Don’t forget to submit your results- they all help build a better picture of our UK birds.

Lastly, here’s one to be jealous of- a local SWT supporter rang us for help identifying two birds in her flooded field over the weekend, which turned out to be a real surprise which we were privileged to share. These wonderful birds are Eurasian cranes– once extinct as a breeding bird in the UK and last year they bred in Scotland for the first time in 400 years. They are currently the subject of a reintroduction program in England too. It just proves you should always look out for the unusual! 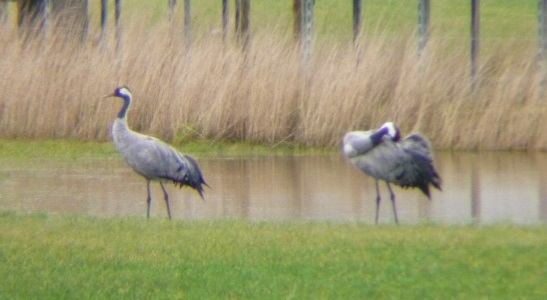 So far its been a very soggy winter here in highland Perthshire and though we’ve had a dusting of snow, there has mostly been rain, rain and more rain! This …