Sorry for the couple of days delay to our usual updates- just a few technical glitches this week!

Our surviving young osprey in Africa, Blue YD’s movements this week have been routine, alternating his time between his favourite roost spots, and hunting over the Senegal river. His most adventurous day was on the 5th of December when he headed north to a lagoon near the village of Diahoulel, just north of the main river channels. 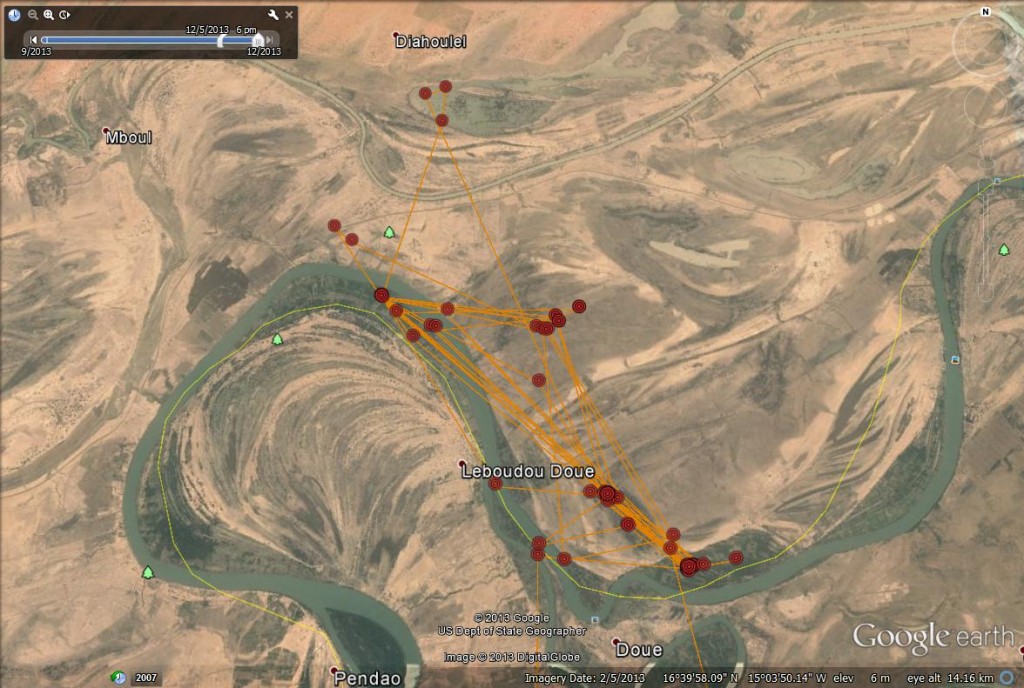 Q: On a purely ‘value for money’ exercise could I ask you whether you think the cost of sat tagging is justifiable?  I think it costs £3,000 to tag one bird and so in just two years £6,000 has been used with really nothing to show for it – £6,000 that could have been used on other conservation projects for wildlife here.  As you say we know that perhaps up to 70% of youngsters don’t survive their first migration so the chance of losing a sat tag is very high and with it another £3,000.

A: This is a very good question and there is always a balance between the benefits and costs of scientific research.  Do remember that the money for the satellite tagging of our ospreys came not from core SWT funds, but from the generous donations of individual supporters who wanted to contribute directly to this sort of research and asked for it. The project is therefore happening in addition to our core wildlife conservation work here in Scotland, not instead of. Also, we think we do have a lot “to show” for project- invaluable data to contribute to wider research into UK osprey migration and conservation. Both Blue 44 and Blue YZ’s journeys were unique and gave us snippets of information we didn’t know before, as well as adding to the bigger picture. We always know the chances of loosing young birds were high, but even if a bird didn’t survive, we knew we would still learn valuable information.

Q: Is it a bit of a coincidence that both the satellite tracked ospreys from Lowes have gone missing, data-wise, on approximately the same dates, though different years of course.  Both transmissions gave up in the first week of November, 2012 and 2013.   Could there be a link: genetic problems, satellite charging panel obscured by growth of feathers, harness obstructing lungs and heart circulation in the birds or perhaps they just chewed off harnesses?

A: We don’t think there is a link other than the fact that young ospreys are statistically more likely to be lost in their first few months than at any other time, so it is not unlikely to lose two birds at this age during their first migration. There is no evidence to suggest any disadvantage to the birds wearing a tag and as I mentioned, we know survival rates of tagged and untagged youngsters are similar. You mention the possibility of a genetic link- you are of course correct that the two birds are related, but both seemed healthy and fit and showed no signs of abnormalities. Both had admirable starts in life and were well fed too- we think higher fledging weight is an advantage on migration (better fat reserves) but this isn’t proven.

What this may illustrate is that no matter how strong a chick, there is a huge amount of luck involved in its first migration and initial survival- luck with weather, navigation, persecution etc.

A: The satellite tracking tag is solar powered, so relies on the bird being mobile and upright to charge its battery. Transmitters can continue to work for a short while after a bird dies on land, but once the battery runs out, they usually cannot recharge and then stop transmitting. Alternatively, if a bird drops into water, lands upside down, or is shot/ caught and the tag is damaged, the transmitter will stop working very quickly.

Q:  I have seen pictures of really pathetically constructed and perilously perched osprey nests.Does your organization do any home improvements once a nest-in-need has been vacated?I have read that Osprey don’t seem to mind minor relocations and renovations. I also saw a picture of nest that incorporated deer antlers. Have you seen any unusual items used as nest décor?

A: Yes there are some truly remarkable osprey constructions around the world though not all of them are secure and sturdy! Here is Scotland these include trees, electricity pylons, mobile phone masts, and artificial nest platforms on poles. Many will not realise that the nest our ospreys use at Loch of the Lowes is in fact, artificially supported- a platform erected in 1990 to give the birds a stable base on which to construct their nest. We do go up at least once a year to check its stability and reinforce if necessary (this can be done safely when the birds are away for the winter) . On other sites, osprey platforms are put up to encourage new pairs of birds to colonise new areas of their historic range as this species recovers from local extinction in the UK.

As for the strangest thing we’ve seen on a nest- black silage plastic and baling twine is probably the weirdest and most dangerous- a young osprey was found dead locally hanging upside down from a nest with a leg caught in the web of plastic, highlighting the risk of litter to wildlife.

Sorry for the couple of days delay to our usual updates- just a few technical glitches this week! Our surviving young osprey in Africa, Blue YD’s movements this week have …