Just short flights from the nest today by our osprey chick- she is really getting the hang of landing a bit better too!

Blue YZ is also making strides in her skills in dealing with food, even when it’s alive: the male arrived back at the nest this afternoon with a small pike, whilst the adult female was absent. The pike was flapping and writhing around the nest and our youngster was able to stand on it and subdue it before feeding itself- all skills she will soon need to be fully independent. If the adult female is around when a fish arrives, you will still see her ‘babying’ the chick though and feeding it small morsels- old habitats die hard.

There has been a change in the birds around the loch recently as more and more birds begin to turn up having finished their breeding for the season. Families of ducks and geese with ‘teenage’ young in tow, and non breeding birds (those that have not been able to nest or lost young) are now starting to congregate in their ‘off season’ territories like Loch of the Lowes. We have seen more Tufted Duck on the loch and on Tuesday evening a Diver– unfortunately it was so far out we couldn’t tell if it was a Gret Northern or Red or Black-throated species. These wonderful birds breed on high mountain lochs in Scotland. Here is a picture of one seen in a previous year on the reserve. 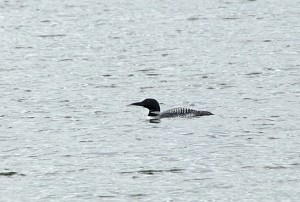 More news tomorrow from our other local Perthshire reserves where your ranger team have been doing endless fieldwork to keep the habitats in top condition for all our wildlife.

Just short flights from the nest today by our osprey chick- she is really getting the hang of landing a bit better too! Blue YZ is also making strides in …