Today is one of my favourite days of the year, when as a ranger I get the amazing privilege of meeting one of our ospreys face to face- always an awe inspiring experience.

Today was ringing and tagging day for our chick at Loch of the Lowes, and most likely the only time in its life this bird will be handled by humans, with an expert team assembled, including the foremost expert in Ospreys in the UK Roy Dennis ( from Highland Foundation for Wildlife) and Keith Brockie from the Tayside Raptor Study Group. Ringing and Tagging is done only under  license from SNH, on the basis of scientific research into Osprey ecology, behaviour and migration. This well attested technique is done is such a way as to minimise any stress to the birds and takes about an hour from start to finish.

Here’s how the process works:

Firstly our ranger and a helper Toby Green canoe the team across the loch. As soon as we are visible on the shore, the female osprey takes off the nest alarm calling, so the chick ‘plays dead’ on the nest, and the male joins in calling and circling overhead.

Keith has the unenviable task of climbing the huge Scots pine tree to the nest with specialist kit. The chick is feisty and has a couple of good pecks at Keith as he reaches the nest, but neither parent ‘dive bombs’ or interferes. He picks up the chick and places it in a bag in which it is lowered safely to the ground.

Roy Dennis and Keith quickly assess the chick, finding it a healthy and very generously proportioned female, who is obviously well fed and has a very full crop (that’ll be that lunchtime pike!). Her measurements are: Wing length 375cm, tail 170cm, weight (including pike lunch) 1800 grams.

The chick is given a metal ring which should last its lifetime with the serial number 1439121, and a contact to report the bird to if it is ever found dead or injured.  It is also given a blue and white Darvic plastic ring (very lightweight) which has the code YZ on it.

The chick then has its tiny satellite transmitter fitted by Roy and this is carefully sewn together at the front to make it secure. After a few photographs the chick is placed back in the bag and Keith returns it to the nest, where is lies flat again in response to its parents alarm calls overhead.

Both adult ospreys circle overhead whilst we canoe back across the loch, and continue to ‘patrol’ the area around the nest for about an hour afterwards. The female is back on the nest around 4pm and the chick is behaving normally.

The three unhatched eggs were removed from the nest at the same time so they can be analysed for clues as to why they did not hatch.  I will be taking them to the National Museums Ornithological expert later this week. 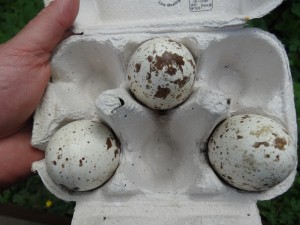 To have a healthy chick who is such a good weight obviously bodes well for the future (especially this autumns hazardous first migration) and of course the benefit of the satellite tag is that we will all be able to follow the story of our Loch of the Lowes lass Blue YZ as she makes her first journeys- it’s going to be an exciting rest of the year!

Today is one of my favourite days of the year, when as a ranger I get the amazing privilege of meeting one of our ospreys face to face- always an …