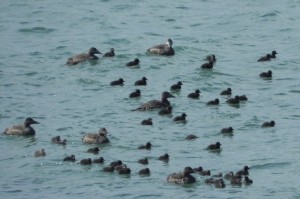 It is Mother Nature’s time of plenty when the plant and insect life are at their peak. However, a few weeks ago you would not have thought this with the late flowering season but it seems now that most things have caught up. So much so, that we are seeing an abundance of many plant species with the flowers all coming out at the same time. This will in turn allow the insect species to feed up well, and correspondingly the birds. It is the time of year to look out for young birds, and at the SWT Montrose Basin, this means ducklings. The most obvious ones are the Eider ducklings, which form crèches with the dominant females taking charge. These can be seen from the wonderful picture window at the Wildlife Centre, especially when the tide is in. The Eider females are very good parents, and will defend the young from marauding gulls. The ducklings will feed for themselves almost immediately they are out off the egg, which they break open by the use of their egg tooth. So the females really only have to protect them from predators and keep them warm at night or dry during cold and inclement conditions. 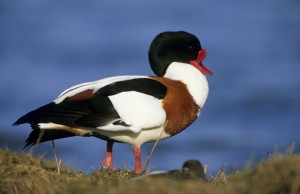 Another duck to look out for at the Basin is the Shelduck. Their young are black & white in contrast to the Eider ducklings, which are darkish brown. An interesting point about Shelducks is that the duck and drake are very similar and brightly coloured. This is due to the fact that Shelducks nest down rabbit burrows, and therefore have no need for camouflage unlike the female Eider which sits out in the open for at least four weeks. The young of the Shelduck usually leave the burrow in the hours of darkness to try to avoid being predated. 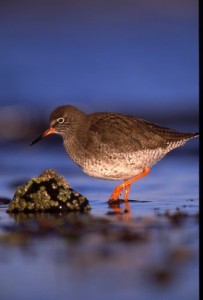 Other young birds to look out for in and around the Basin are wader chicks such as Lapwing and Redshank. Moorhens also will have their young out and about, and they should be visible from the Centre. I believe I may have mentioned in a previous Basin Notes that a few of us witnessed an adult Moorhen catching and eating a baby Sand Martin which popped its head out of the artificial nesting bank in front of the Centre! This is most unusual, as normally they would be feeding on aquatic insects and vegetation.

A fairly common question is “should we keep on feeding the birds during summer?” Well, several years ago, the general idea was not to feed them as they should find more natural and better food in the wild but more recently, because so many people get such pleasure from attracting birds into their gardens, it has been given the okay as long as the food is not whole peanuts, coconut or white bread.

The activities at the SWT Wildlife Centre in July are :

It is Mother Nature’s time of plenty when the plant and insect life are at their peak. However, a few weeks ago you would not have thought this with the …