Our osprey chick goes from strength to strength here at Loch of the Lowes, and is already considerably bigger than when it hatched on Saturday. There have been plenty of fish today- the poor male keeps sitting on the edge of the nest  as if ‘asking’ to be allowed to take a turn at incubation like he used to, but our female stubbornly refuses to budge, being very possessive of her chick. 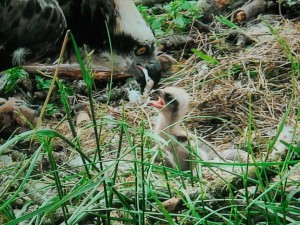 Q: Will the osprey chick be ringed or tagged this year?

A; Yes, if it survives and is considered fit and strong enough, it will be ringed and tagged at around 6 weeks of age by an expert team led Roy Dennis.

Q: Will you be naming the chick?

A: We have already received dozens of charming and touching requests to name this chick- it would be impossible to decide which to choose. We will be giving the chick a name based on its Darvic ring number when this is decided at ringing, as we did with Blue 44 last year.

Q: Will this chick suffer if it’s an ‘only child’?

A: No, it will be fine, lavishly looked after by both parents and will probably be the best fed chick in Scotland!

Q: If another egg does hatch now, won’t the first chick be much bigger and stronger and bully the other?

A: Yes the first chick will be at an advantage, but sibling rivalry on osprey nests is relatively mild, as long as there is enough food to go around, and osprey chicks don’t eat each other ( unlike barn owls etc).

Q: Would it be possible to tag the female osprey and then if she doesn’t return next year (a very strong possibility because of her age) then at least we would all know what finally became of her?

A: It is very difficult to catch and tag adult ospreys- a technique Roy Denis has pioneered in the UK. Unlike chicks they are hard to catch and handle and can get stressed by the process. We have discussed the possibility of doing this, but decided that given her advanced age, anything extra that might cause her any stress wasn’t in her best interests.

Q: Why have the other eggs failed this year?

A: It looks likely that we will have a single chick on this nest this year unless we get a very late surprise from egg four. It is possible that the other eggs were damaged by the chilling they suffered during incubation. It is also possible that they were never fertilized and this may because of our females age or another factor. One possibility is what biologists call “ Inbreeding depression” where if two animals are genetically closely related, their combined fertility is lower. It is just possible that if this young male is a descendant of our female, this might be a factor- but we cannot know for sure.

Q: Is this the same male osprey that tended Lady when she was so ill on the nest several years ago?

A: No, that male Green 7Y was her mate in 2010 but he did not reappear in spring 2012 and was replaced at this nest by the current male. It is most likely that he did not make it through migration unfortunately.

A: Not much, as far as we know it is rare to see these birds land on the ground and drink here in the UK ( I can only remember seeing it once and that was when our poor female was recovering from her terrible illness in 2010).  I am not sure how common this behavior is in drier climates like Africa where they winter- I hope to find out next winter myself.

Our osprey chick goes from strength to strength here at Loch of the Lowes, and is already considerably bigger than when it hatched on Saturday. There have been plenty of …