It’s been a busy few weeks here at the Falls of Clyde, not helped by the fact I’ve been off gallivanting in the woods in the south west on some unrelated chainsaw business for the Scottish Wildlife Trust. Whilst Ive been away the ranger team have been doing there best to keep you informed on what has been happening with the Peregrines and along with the help of our volunteers, somehow managing to keep both eyes on the peregrines, wherever they can spare them. I thought Id update you on what I’ve been missing out on…

1st egg 2nd April: After a fingers and toes crossed peregrine Easter egg hunt, the birds decided the to lay the first egg of the season the day the after the Easter bank holiday was over and I left to go off from my chainsaw assessments.

2nd egg 3rd to 16 th April: So what happened next? I’m still trying to work that part out; normally we would expect the falcon to finishing laying her clutch of 2-4 eggs in a week or so laying an egg at 1 to 2 day intervals. Peregrines don’t fully incubate until the last egg has been laid, this is so the eggs develop at an even rate and the eyasses hatch within a day of each other, growing equally and making life a lot easier when they start to learn to hunt and compete for food together, without one eyass dominating another.

However, the adult pair are behaving as if to suggest they haven’t finished there clutch yet, often leaving the eggs unattended for up to 2 hours at a time. I’m sure I don’t need to tell you that’s it not the warmest spring on record either, with is rather disconcerting. The tiercel is also doing the majority of the incubating through the day with the falcon taking over duties at night.

I would expect the falcon to take over the majority of the incubation duties the closer we get to the hatching date, in previous years she has done most of the incubation once we are within a week to two weeks of the big day. This is because she is bigger than the male and has a specially adapted brood patch to help keep the young eyasses well covered and warm. She also has very strong maternal instinct and often tries to keep the excited tiercel away from his newly hatch offspring. Although he means them no harm directly, she may use this as a way of asserting her dominance (which she often likes to do) over the male or simply from preventing his present on the eyrie from distressing the young birds.

Your guess is as good as mine, so I cant tell you when or even if we have a second egg but I can give you keen eyed readers proof we have at least one. The first image is for followers who found Katy’s spot the difference blog on 11th April too easy…Can you spot the egg in this picture? 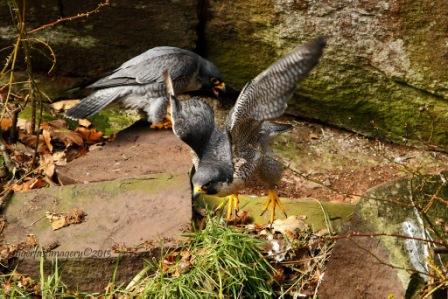 Give up? Here it is… 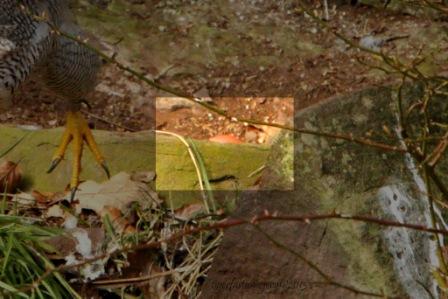 I have seen the egg myself but I’m very grateful to visitor Ross Forsyth © for his stunning image of egg at the moment of nest change over. Id had my doubts after the falcon had almost seemingly placed a oak tree leaf strategically over the egg yesterday afternoon and made me doubt if it had ever been an egg at all.

It’s good to be back

It’s been a busy few weeks here at the Falls of Clyde, not helped by the fact I’ve been off gallivanting in the woods in the south west on some …