Alan Anderson is the Head of Reserves at the Scottish Wildlife Trust. Here he recalls his highlights of visiting the Falls of Clyde reserve.

“My highlight of the year is, rather simply, the same as every year; watching the never ending river pour over Corra Linn and the spray enveloping the trees above. 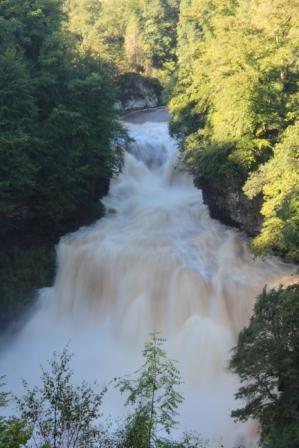 Having being brought up in ’60’s Renfrewshire and the east side of Glasgow, never more than  a couple of miles from the Clyde, my early riverside memories  were of bridges, steel works, ships and buildings going up, and coming down seemingly everywhere. It was a quarter of a century later, when I first saw the Falls…and the contrast between my image of the river and what I was looking that is probably akin to Dante’s Inferno and The Garden of Eden!

Although the falls and their surrounding woodland remind me of how lucky I am to be, in a small way, even a temporary custodian; its Mother Nature who’s really in charge…of all of this great river.”

Alan Anderson is the Head of Reserves at the Scottish Wildlife Trust. Here he recalls his highlights of visiting the Falls of Clyde reserve. “My highlight of the year is, …