Among the many bird species seen along this stretch of the Clyde one of the most regularly seen is the Dippers (Cinclus cinclus). These portly little birds are often seen sitting bobing up and down on the rocks or diving for freshwater invertebrates outside the visitor centre. 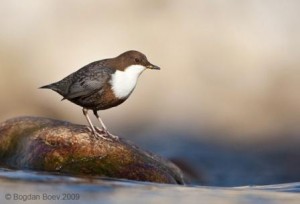 This week there have been three dippers seen by the river! Two have been chasing each other around and one was seen performing a display in front of another, wings outstretched and chirping loudly on a rock. It is unlikely to be two males competing over one female due to the time of year and the fact that dippers are very territorial. Much more probable is the idea that it is two older juveniles still begging an adult for food and competing between each other. This probably means that the two will soon be driven out of the adults stretch of the clyde, and each will establish their own territories elsewhere.

Among the many bird species seen along this stretch of the Clyde one of the most regularly seen is the Dippers (Cinclus cinclus). These portly little birds are often seen …