It often seems to be the case that the most exciting this happen just before a group of vistors arrives, or just after they have gone! This morning however, one of the juveniles bucked this trend….. It came and sat just 10 metres in front of the peregrine watch site. It was sat here for well over an hour, and treated everyone to what, for most will be the closest they ever get to a wild peregrine! The best part was how it looked directly in to peoples eyes, clearly fascinated with the new and exciting world around it. 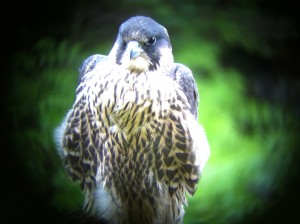 The moment was ended when the adult female came back with a pigeon. She is very good at making the young ones work for their food. She will often fly around and get the young to chase her before giving them some. Both juveniles were fed off this rather large carcass, but she will not trust them with a whole pigeon (double their daily intake of food). The falcon insists on feeding them herself by tearing bits off, just as she did when they were much younger! Sometimes the adult female encourages the young to fly even without food, by flying around calling.

The tiercel hasn’t really got involved with the parenting side of things, I wouldn’t call him a ‘modern man’! His life seems to be; hunt, rest, preen, be given grief by the falcon (and young), hunt! He is still bringing in a lot of food and showing no signs of slowing down, an incredibly impressive individual. The pigeon caught by the female acted like a magnet for the rest of the family, with the tiercel also co-incidentally appearing on the cliff face. Being the smallest though, he had to wait till last to get his share! It was a fantastic moment, as all the family were giving great views. Of course as I posted on the 31st of March, there is the possibility that the pair hunts together.

It was also really nice to see the juvenile falcons playing in the air today. They chased each other around and locked talons in the sky! (although I am yet to see them fly too much above the trees, that will come). This is all really important for building up the aerial prowess and their flight muscles. Getting hold of their siblings tail in the air, is great practice for catching a pigeon after a high speed stoop! The mother flew up high in the oak tree, as if watching over them during playtime, making sure they behave themselves.

The young are now looking smart in their full juvenile plumage. Browner and duller than the adult form, with a blue-grey cere and eye ring. The streaking on the chest is vertical as opposed to horizontal on the adult. This plumage makes them very difficult to see when sat in trees, reducing the chance of them being seen by predators (of which there aern’t any natural ones here). Eagles and other large birds of prey would take them at this stage in other parts of the world. Unwary young who aern’t great at taking off, or are too busy exploring could be taken by a number of canid predators in other areas.

The young will keep this plumage until next spring when they will start their first full moult. Due to there need to fly every day, the moult is gradual (they won’t become flightless like ducks) and could take up to 4 months. They will then look much more like adults but will maintain and number of brown feathers, so they can be aged. Adults moult at the end of the summer, (when their hunting is reduced, as their demanding young have gone!) but can be in moult for several months with the flight feathers replaced at a rate of 1-2 at a time!

If you are in the Lanark area this week, come visit us at the Falls of Clyde and you may get a close encounter that you will never forget!

It often seems to be the case that the most exciting this happen just before a group of vistors arrives, or just after they have gone! This morning however, one …