The eyasses were successfully ringed today, by George Smith of the raptor study group. We were able to see that both the chicks this year are female, which is great after having 2 tiercels last year. Both chicks were similar size with one slightly larger at 840 grams and the other 800 grams.

It was great to be able to hold the young falcons after watching from afar. One chick seemed a little more feisty than the other, giving out a number of kicks and screeches! The other seemed quite happy to be in the hand, looking directly at me with its very large brown eyes. The whole incidence was over fairly quickly and just an hour after being returned to the ledge the eyasses were fed once more.

The parents seemed less agitated by a man being on their nest than in previous years. It has been claimed that peregrines can recognise human individuals by their faces. In that instance a pair of peregrines were nesting near a popular footpath, so were used to people walking by. When the researcher who ringed the chicks approached using this footpath however, the birds went mad! Maybe after years of their chicks being ringed they know George is of little harm to them and will always return their offspring to the eyrie. 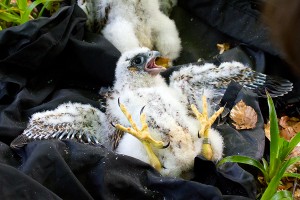 It remains extremely important to ring the chicks. It is useful to be aware of how far the fledged chicks disperse in this area. It is important to know how this well protected pair is helping to repopulate the lanarkshire and border areas. It has been found recently that peregrines have shown declines in upland areas, such as those surrounding the falls of clyde. It is particularly important to research the peregrines in these areas. Further to this there is still much peregrine persecution in the more remote areas of the county where wildlife crime goes on unchecked.

It was sad to hear from George today, that some of the other nest in the region have failed. Some of these are possibly due to the poor weather early on in the season. Others however have disappeared in suspicious circumstances and although there is no evidence to suggest why, it is suspected human interference is to blame. Unfortunatly we cannot guard all nests (although I would like to try!) due to lack of funding. The law is on our side, but it is very difficult to enforce in the more sparsely populated areas. Hence why Hen Harriers are almost extinct in England!

On a more positive note, our chicks continue to thrive, both are healthy and just Two to two and a half weeks to fledging

The eyasses were successfully ringed today, by George Smith of the raptor study group. We were able to see that both the chicks this year are female, which is great …